Great success was made by my students at the Upper Bavarian Championships last weekend, especially in the age group of young riders.

There, Alicia Pflüger and Ramon secured, completely unexpected, the gold medal.
In the first special stage, a M**-dressage she was tied with Lisa Grupen on the 4th place, but was able to win both the S*-dressage and the St.Georg. Lisa, who actually was still allowed to start in the Junior I tour was second in the two S*-dressages with her only 8-year-old Finnigan and was pleased with the silver medal. With her second horse Fairytale she managed a 3rd place in the S*-dressage.

In the Junior II tour three of my students were taking part and reached the finals. Emma Gömmer who rode three beautiful rounds with Piccolina B. was rewarded with three rankings, who then slightly missed the place on the podium and was fourth in the overall standing.
Magdalena Wöhrl, due to an injury of her experienced horse had to go back on her younger, still unexperienced mare Jil was still able to be happy about a placement in the finals. Our youngest,
Luisa Eichinger, who just celebrated her 13th birthday, has also fought bravely, even though it was not enough to end in a placement. 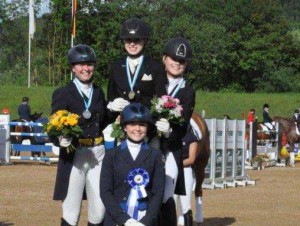 We are all particularly pleased with the 5th place in the overall standing by Vanessa Donhauser and her Cora Lagranna in jumping Junior II tour. On the weekend before they placed their very first L-jumping and in Schwaiganger showed how well they have already grown together.

It was a great experience, and for most of the girls it was their first at the championships and we are looking forward to the Bavarian Championships taking place in Munich from 15 to 17 July 2016. 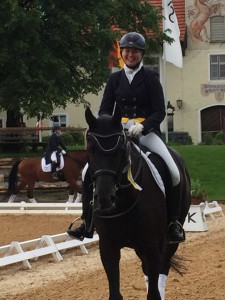 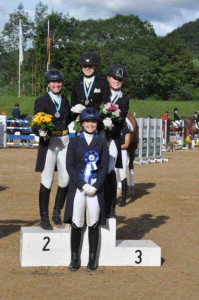