At the competition for the “Price of the Best” and the “ Federal junior championship “ at the Olympic venue in Munich-Riem, my two students Emma Gömmer and Magdalena Wöhrl were already in very good shape.

The 14-year-old Emma Gömmer started within the age group of the Junior II and had two FEI children tasks to complete. After Piccolina B. had been very impressed and unconcentrated on the first day by the Olympic hall and Emma had to forego a rating, she showed nerve strength on the second day. She gave her mare the necessary safety and with a harmonious, constant round she entered an excellent 4th place.

This also means an invitation to the Bavarian selection program for the Federal junior championship.

The 16-year-old Magdalena Wöhrl, who started riding dressage only two years ago, had to start in the age group Junior I, which meant two FEI tasks on M ** level. 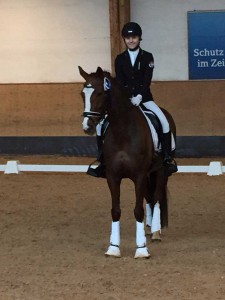 Magda, who still had no experience in this class, was able to ride a good round on the first day with more than 65%. On the second day, she succeeded in improving some mistakes of the previous day and she reached 67.05% with her Davaribo, which in the end meant fifth place and a very happy Magdalena.